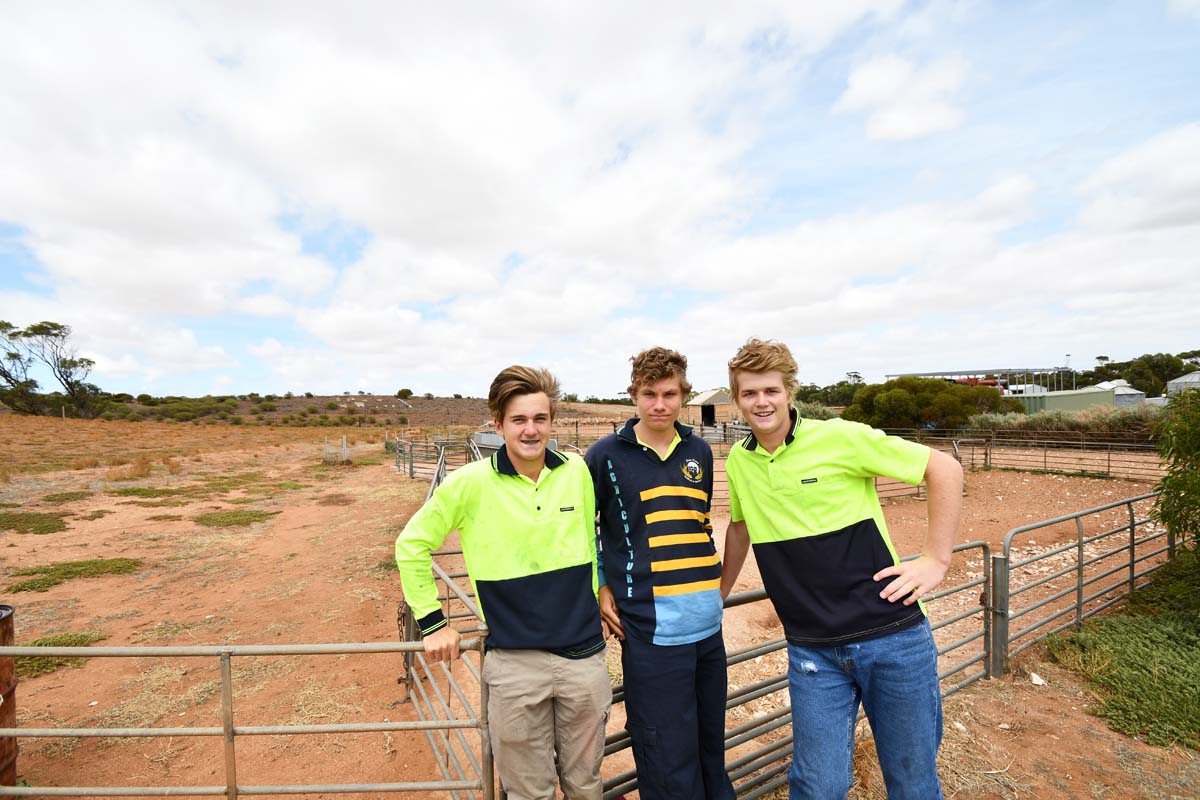 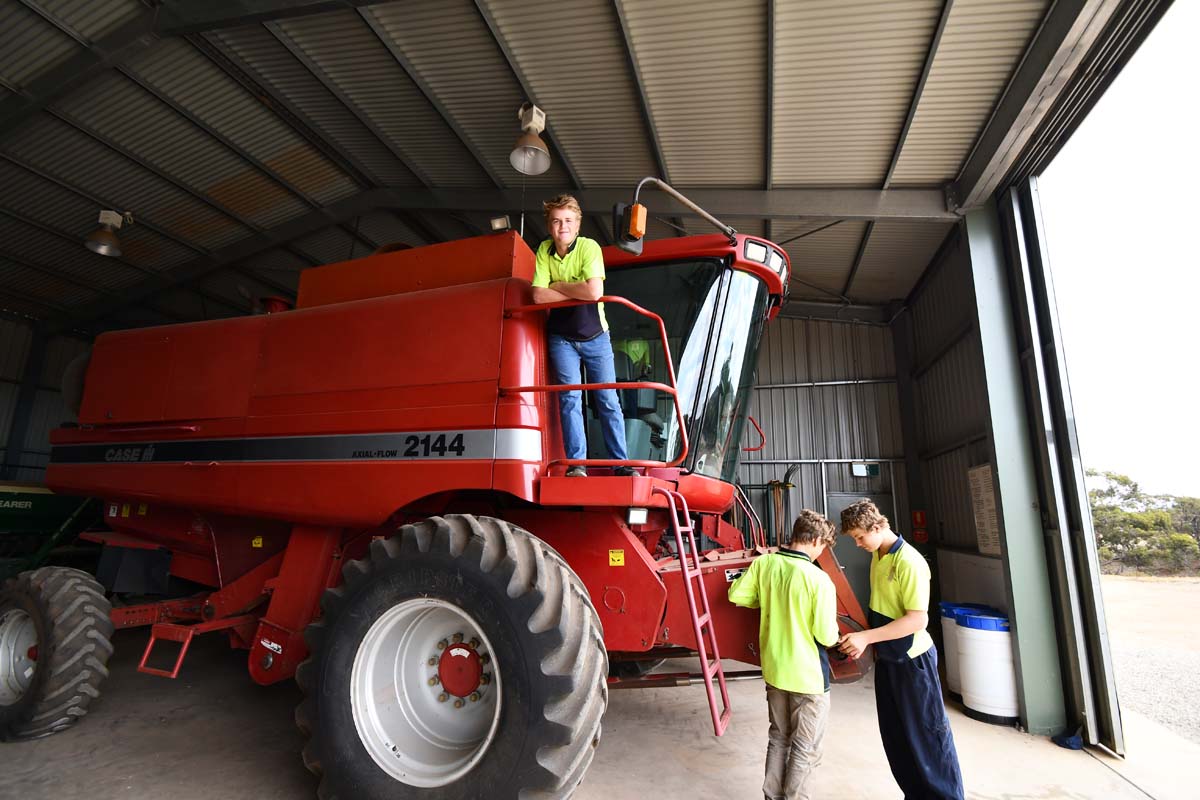 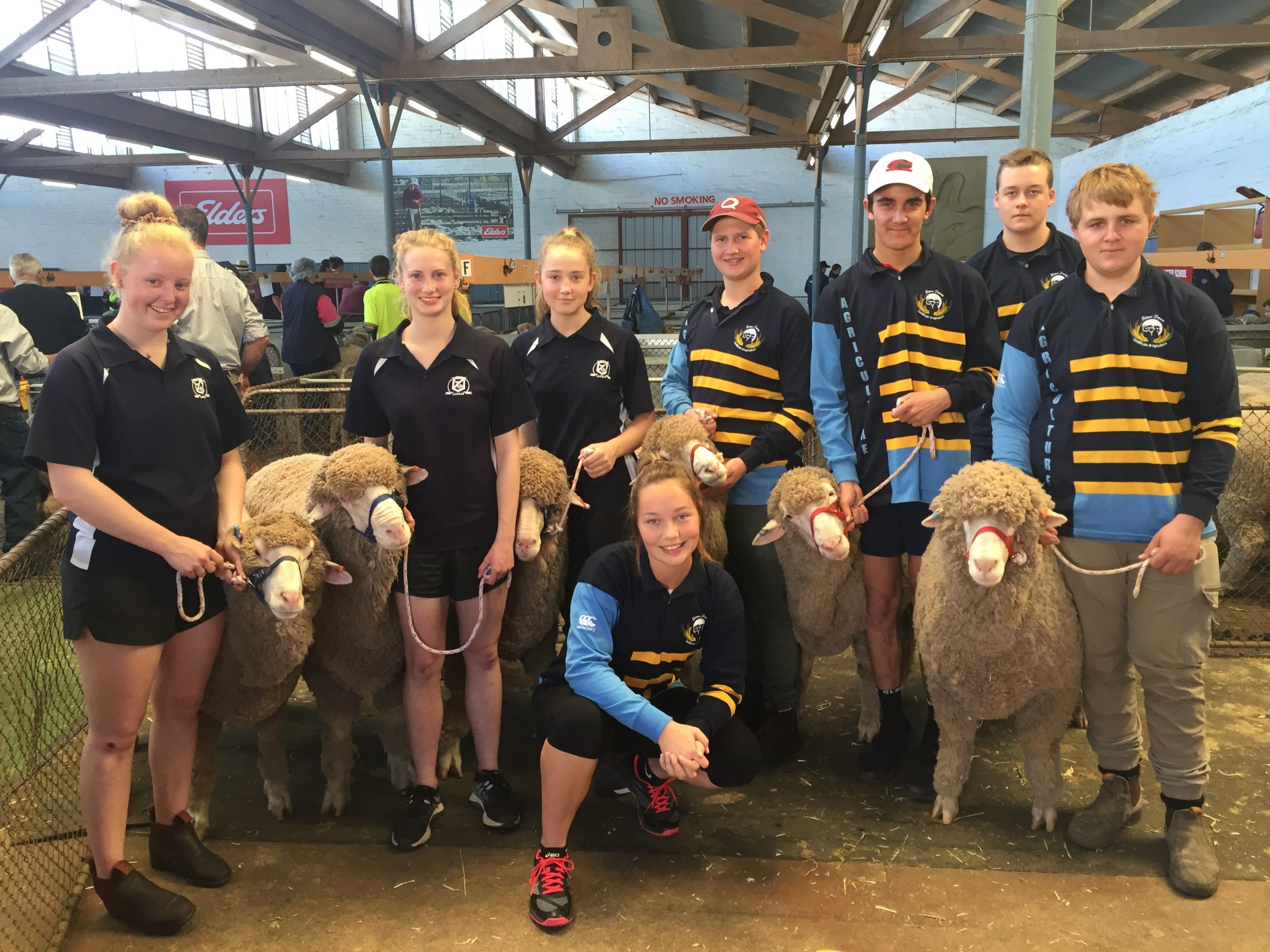 This is a valuable resource for the teaching and learning program at Cleve Area School.

Sims Farm is 350 Ha (1000 acres) and is operated as a commercial enterprise by the Sims Farm Operations Committee, running 350 poll merino sheep and cropping a variety of crops.  The Farm also receives extensive sponsorship from the agricultural sector.

Students within the Agriculture Program make extensive use of Sims Farm.  It has been established as a “Work-place” under the definition of the Certificate program and students undertake “Structured Workplace Learning” on the Farm and attain many of the hours required of this type of learning for the Certificate II in Agriculture.

Sims Farm was bequeathed to the Government of South Australia in the 1960s, by Mr Gordon Sims.  The conditions of the bequest were that it be used as a “Training Farm, Research Centre or Seed Grain Farm”.  The following is an extract from the speech (author unknown) at the opening of Sims Farm.

“Gordon Sim’s father, Mr. Thomas Sims came to this area from Pt. Lincoln in 1876.  He spent several years around and about here doing contract work before taking up sections 44 & 45 Hd. of Mann and named the property Dingle Dell.  He settled down and took a leading role in the development of the district and became the First Chairman of the Cleve District Council when it was formed in 1911.

In 1880 Thomas Sims married Amy Gates, and Clarence Lincoln Gordon was born the seventh child in 1892.  Gordon grew up and spent all his life here at Cleve and in his early years he and his sister Audrey walked across the paddocks to school which was held in the Methodist Church as there was no formal school building at that time.  He spent nearly all his life in the Dingle Dell homestead which was built in 1913 and on the veranda of which we still enjoy.

Following the death of his father in 1931, Gordon Sims took over the running of the farm and went on to be a very successful and progressive farmer.  Animals and animal husbandry was very close to his heart and he took great pride and joy in those that he owned.

He was best known for his Clydesdale Horse and Dorset Horn Studs.  Gordon imported from Scotland Stud Clydsdale stallions such as Panacea and Mossdale Ringleader.  He bred good stock from these horses and colts were sold to farmers around the district.

Mr Todd Elliott who worked for Gordon travelled the stallions around the district to service the farmers’ mares; this area was from Cockabidnie in the west to Carpa in the east.

Gordon never used a tractor on his farm; he only ever worked his horses.  He built modern stables attached to his chaff-shed and chaff cutter room, and a concrete walled stallion shed all of which still stands today.  The harness room was immaculate with well- oiled collars, wagon saddles, winkers and other harness kept neat and tidy.

Gordon Sims was a good farmer, he grew good crops, he very seldom ran short of feed as there was always a large stack of sheaved hay in the yard, which was used for chaff.  The grain was carted to Arno Bay and because of the sandy road, 8 horses were used in the steel wheel wagon with a load of 66 bags going as far as the main Cleve – Arno road near Peter Rehn’s place, then 6 horses could take the load into Arno Bay from there.

When Gordon upgraded to a pneumatic tyred trolley with a load of 66 bags, 4 horses took the load and often trotted a lot of the way

Gordon was also successful in the show arena, a cup and show winning ribbons won at the 1940 Cleve show are now held by the National Trust.  Also in 1940 Gordon founded a Dorset horn sheep stud, his sister Audrey became very interested in this project and worked along with her brother.  Taking things a step further and always ready to accept a challenge he began to breed fat lambs.

Dorset Horn Merino cross ewes crossed with a Southdown ram produced excellent carcases, and during the years 1947 – 54 they won 2 State Grand Championships, 1 State Reserve and 3 Eyre Peninsula Champion lamb carcase competitions.  In 1951, third placing was gained in a lamb carcase competition in England and so in 1552 Audrey travelled there to receive the presentation.

Some 50 years ago, Gordon Sims won a trophy with his sheep at the Cleve show.  That particular trophy has been mounted, and is on display at the Cleve Area School.  We have named it “ The Gordon Sims Perpetual Trophy”. It is open to be won by a Year 11 Agricultural student each year who excels in the subject of’ Animal Husbandry, and their name is attached to the trophy.

An unusual feature was that there was never a dog on the farm at Dingle Dell.

Gordon Sims was a rather reserved and quiet farmer, his farm & animals came first; he did play a little football in his younger days, but his main sport was cricket and he was awarded Life Membership of the Cleve Club.  Gordon was a bachelor, but the descendants of the Sims family still living in the district are from his eldest sister Pearl..

Clarence Lincoln Gordon Sims passed away August 16th. 1960, and in his Will he bequeathed his property Dingle Dell to the South Australian Government, who in turn was to make it available to the Department of Agriculture, as a Training Farm, Research Centre or Seed Grain Farm.

We trust that this has now come to pass; The Gordon Sims Training Farm which will be for the benefit and education of our future farmers.  This and future generations will always be indebted to Gordon for the gift of his farm.”

The inscription on the headstone reads;